Know your WA Rugby League True Blue – Bob Granville senior debut at home for his beloved State in 1964 as a 17 year old centre was against France after an impressive Colts tour and a WA senior State game at Woomera against South Australia. By the time he fronted up for the Grand final in 1968 as the 1968 Brice Trophy winner Bob had played against South Australia, Victoria, and Northern Territory, St George and Illawarra in just about every position in the backline from halfback to fullback. 1968 was to be a stellar year for the local WA junior as it ended the season with a 13-11 Grand Final win for his team Victoria Park over a talented Applecross side who had won the last 4 Grand Finals. By 1970 when Victoria Park was back in the Grand final again Bob had toured NSW with the State team, played Northern territory 3 times with one of those games on the Sydney Cricket ground as curtain raiser to the Australia vs England match and fronted up against Balmain at Belmont Oval. In 1971 Bob took over the coaching reins at Victoria Park at 24 years of age and was to play for Perth City over the next few years. Bob Granville was a humble man from all accounts and served his state and club well. Bob is a Life member of the Bulldogs and Hall of Fame member. We salute a WARL True Blue. 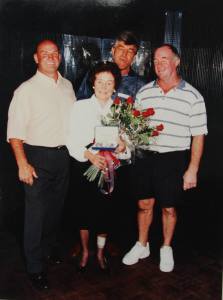