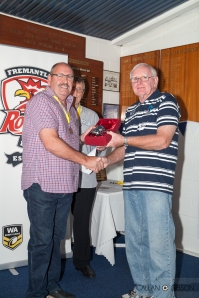 Deserved inductees Mark and Peter have contributed to WA Rugby League both on and off the field over many years.

Mark with the North Beach club and at State senior and junior management level, Peter with the Fremantle club, the REDS and WARL board. Peter was also a member of the 1976 Fremantle 1st grade premiership team that was honoured at this re-union.

Congratulations to both of you on your membership to WA rugby league “Hall of Fame”.